If Satan's Such a Hateful Fiend, Why Is There So Much Good In the World?

— A Thanksgiving Meditation for the Believer —

With Thanksgiving Day so close I can almost smell the hot, buttered rutabagas, it seemed appropriate that I should spend the evening giving my neglected old thank-u-later a tune-up.

So, for starters, I got to thinking, "What's the number one objection we humans raise—consciously or otherwise—to unreservedly expressing our gratitude toward God?  And how should we deal with it so as to become duly thankful?"

Google.com, that unquestionable authority on all human knowledge, lists 305,000 places to visit across the World Wide Web that attempt to deal with that #1 question:
"If God is such a loving God, why is there so much evil in the world?"

How excruciatingly depressing!  305,000 worthy philosophers have stocked the shelves of cyberspace with answers of all sorts.  And what’s more, in a mere 31,000 verses, God Himself has provided the right answer!  So, where does that leave me?

Being a reasonably resourceful chap, I decided to tackle a different, and possibly more relevant, question that might prove more of a challenge for Google:
“If Satan’s such a hateful fiend, why is there so much good in the world??"

You see, God is so incredibly, unfathomably good!  The world is simply asking the wrong question.

Think about it!  After God made us a little lower than the angels, crowned us with glory and honor, and set us over creation, what was our response?  High treason!  We bit the Hand that made us, broke the Heart that conceived us, sold ourselves and out to His archenemy, and ultimately murdered the Chosen One Who came to offer eternal love and redemption.

And yet, that offer stands.  In Him we still have free access to glorious salvation and all good things if we only lay down our weapons.  But while we spurn both gift and Giver and persist in our wanton dissipation, even so He still causes the sun to rise and the rains to fall in their due season on both the righteous and the unrighteous.  All His creation—vast oceans teeming with life, majestic glaciers, innumerable heavenly bodies, and warm, fuzzy pink-tongued puppies—all these things He has given in abundance for our admiration and enjoyment as well as His own.

Why??  How can so much good endure on a planet that is in a state of flagrant rebellion against its supreme, benevolent Maker?  Why doesn’t He simply kick us to the gutter of the universe as we deserve?  Herein lies the mystery of the love of God that defies all comprehension.

This Thanksgiving season, I choose to focus my heart...

- Not on the 0.1% of mankind the were the tragic victims of our hateful fiend's murder plots this year, but rather on the 99.9% that God preserved alive and unmurdered, with a hope and a future (and to die of natural causes at the appointed time).

- Not on the 0.000006% of American college students that have tragically died in campus shootings instigated by our hateful fiend during the past 10 years, but rather on the 99.9999994% of them that God has graced with the opportunity to complete a higher education degree.

Of course, this sort of list might continue ad infinitum, but the point is obvious.  Without minimizing the shock and heartbreak of our hateful fiend's heinous war crimes against humankind—which is precisely where he strives, through his news agencies, to keep our attention focused—we can choose, instead, to sing joyfully to the Lord, because...well...let's cut over to Psalm 33 for a few good reasons!

1 Sing joyfully to the LORD, you righteous;
it is fitting for the upright to praise him.
2 Praise the LORD with the harp;
make music to him on the ten-stringed lyre.
3 Sing to him a new song;
play skillfully, and shout for joy.

4 For the word of the LORD is right and true;
he is faithful in all he does.
5 The LORD loves righteousness and justice;
the earth is full of his unfailing love.

6 By the word of the LORD were the heavens made,
their starry host by the breath of his mouth.
7 He gathers the waters of the sea into jars[a];
he puts the deep into storehouses.
8 Let all the earth fear the LORD;
let all the people of the world revere him.
9 For he spoke, and it came to be;
he commanded, and it stood firm.

13 From heaven the LORD looks down
and sees all mankind;
14 from his dwelling place he watches
all who live on earth—
15 he who forms the hearts of all,
who considers everything they do.

16 No king is saved by the size of his army;
no warrior escapes by his great strength.
17 A horse is a vain hope for deliverance;
despite all its great strength it cannot save.
18 But the eyes of the LORD are on those who fear him,
on those whose hope is in his unfailing love,
19 to deliver them from death
and keep them alive in famine.

20 We wait in hope for the LORD;
he is our help and our shield.
21 In him our hearts rejoice,
for we trust in his holy name.
22 May your unfailing love rest upon us, O LORD,
even as we put our hope in you.

Because of the incomprehensible, majestic King of the Universe, Lover of our souls and—if we will have Him—our eternal, personal Father.
Posted by Brad Fenichel No comments:

"...upon this rock I will build My church, and the gates of hell shall not prevail against it."
– Matthew 16:18b (KJV)
What are gates for?  Why, that's easy!  They either keep something in, or they keep it out.  Or, they might do both.

Have you ever been attacked by a gate?

I can't say I've ever been chased and assaulted by any gate, large or small.  On the other hand, I did once have an extraordinarily strong-willed garden gate.  It was bent on doing what gates do best---keeping me out.  Sometimes the gate prevailed and I didn't.  And if I was in a particular hurry, I would have to find some other way into my own backyard.

And what is the most common device of hell to be found in America today?  The Gate!

There are gates of hell that keep America OUT---out of the garden of God's wisdom and provision, out of all opportunities for a hope and a future, and most importantly...out of touch with God Himself.


Then, there are gates of hell keeping America IN bondage---to sickness and affliction, substance abuse, physical abuse, demonic oppression, false religions...even empty forms of religiosity in the church itself.

Where is the Church?  The one that God has built upon the great Gibraltar rock of His own lordship and living being?

Are those hellish gates pursuing the Church?  Are they assaulting us?  Pummeling us into the ground?  Absolutely not!  But, there's no denying that they are prevailing against us, because they're holding strong  In other words...strongholds.  Strongholds that defy our polite remonstrances.  "Open up and say 'Ahhh', won't you, please?  Come now, don't be a naughty-naughty little gate!  Jesus would be very cross with you, don't you think?  ... Oh, bother.  I guess this one just won't open up today.  Can't say we didn't try!"

I had a vision of an Abrams tank leveling its fire on an obstinate gate. Nothing can stand up to an Abrams; why, it's the mother of all tanks! 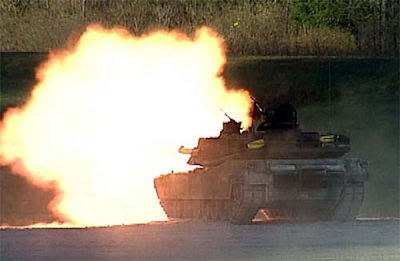 It's about time that the Church stop seeking diplomatic solutions to the gates of hell.  Blast them!  And if they don't fall the first time... Blast again!  THEY SHALL NOT PREVAIL!


- The weapons of our warfare are not carnal, but they are mighty through God for the pulling down of strongholds!


- Be strong in the Lord and in the power of His might!  He's not daunted by those gates, and neither should we be, because...


On the Great Rock---the lordship of Jesus---we the Church have been built.  We have a position of high advantage!  Those gates are nothing but a bluff, guarded by flaming and thundering apparitions that keep us trembling in our boots.  But when we enter the presence of Jesus Christ, He pulls back the thin veil of deceit and we see an emaciated, defeated little enemy working the machinery of fear.  "Pay no attention to that little rat behind the curtain!" he bellows.  But we see the rat is all that's guarding the gate!  Blast it!


Hope for America must emerge within the heart of the church.  It's time for us to stop "looking like grasshoppers...in our own eyes" like the Israelites did as they stood at the gates of the Promised Land.  No!  Shut off that TV and spend time in the presence of God.  And soon, those impish, bluffing little gatekeepers of hell will shrink down to their true size before our spiritual eyes.  They are the grasshoppers.  Blast them!  And let the Abrams tank of the Church of Jesus Christ roll in and reclaim what's His...set the captives free...bring a Hope and a Future once again.